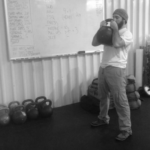 Hero Gym was founded by Mark Regner in 2009 as a rebuke to the current fitness model of machine based gyms and trend/fad training. Realizing that a career in education was not for him, Mark left his career as a school teacher to pursue the field he had always been passionate about – physical fitness. He had educated himself over many previous years, starting his serious interest in training around the age of 23 while studying avidly under Bruce Lee’s system of fighting, JKD. This knowledge base he had acquired during those years allowed him to easily pass a test, and receive his first certification as Personal Trainer, while at the same time come to the realization there was much more wisdom for him to pursue. Becoming a sponge, he quickly pursued other certifications from a deeper knowledge base and more notable sources, such as the USAW, Gym Jones, IKFF, and Scott Sonnon’s CST. During this time, he also continued to devour books and other sources of information on the expansive subject of training – deepening his knowledge base and learning the nuances of periodization, how to increase strength, the developing of power, methods to raise metabolic rate, and ways to change body composition.

Hero gym schedule | This schedule changes due to program designs.